A Fair Bit of Awesomeness

When the fair comes to town, I get fucking overjoyed.Â  Nothin greases my gears quite like a giant $9.00 turkey leg, 1100 pound pigs named Wilber, and these fuckin’ feet jiggler things!Â  I’m not even kidding.Â  As tradition dictates, Pinky and I get extra covert for the first or second night of the fair’s week long run and do our best to sneak in because we’re partly wannabe ninjas and partly just cheap punkass tweeners and we dont wanna cough the $10 admission.Â  And as per usual it was a grand success and shortly thereafter we were reapin in the meat and enjoying the scenery. Dashowedoit.

Mantastic Bromance Turns Violent at the Russian River : That Time I Got Punched in the Face 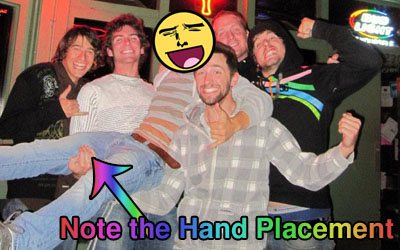 I should preface thisÂ  post with some insight as to where it was that we went for a half a weekend.Â  Guernville, California, a place where urinal spacing etiquette is ignored, men may freely compliment one another on their choice of pants, and threesomes always imply the presence of six testicles.Â  Party on.

It was with cheery morale and ample carbonated cargo that our 3-car convoy traversed the Northern California landscape with Guernville our grand destination.Â  Rolling six men deep and not a damn female in sight our only road stops were to speedily ingest beef and cheese a la in-n-out burger and swordfight in the bathroom, always being careful not to cross streams and consequently rupture space and time.Â  We also talked about football.Â  We love sports and suchlike.Â  Mostly swordplay though.

The bromance intensified once we unpacked at the loveshack / cabin and busted out the brewskis and the guitars.Â  Adequately swooned and sweaty the six of us tightened our chastity belts and made for the Rainbow Cattle a longstanding town landmark.Â  Denim was in short supply and was stretched thin over the undoubtedly shaven and very athletic thighs of the Cattle’s fine patrons.Â  Feeling staunch drinking long island iced teas out of mason jars through pink straws, we swooped on the pool table so all six of us could get to furiously chalking the tips of our cues.Â  What I will consciously omit from this post is the vast medley of drinks we ordered.Â  I shall let my reporting of the subsequent follys convey our collective mindstate.Â  Simply put, gay bar #1 was fucking lovey dovey, aside from denim Dan sexual assaulting Barry with hard stares all night.

Two bars later we were at the bull pen, the neutral orientation destination.Â  Round after round of drinks had left our 6 man wolfpack divided and I found myself wolfless and free from social inhibitions as well as critical thought.

Bad Decision #2 : Striking up a conversation with the most hoodrat looking motherfucker in the room.

This is the part of my story that gets a little hazy and is therefore composed mainly from secondhand sources.Â  It may have been my persistence, maybe the fact that my ability to enunciate was quickly diminishing but it was probably because he thought I was shittalking his bumfuck city of origin.Â  I had asked my newfound acquaintance where it is he now resides and what brings him to the foreskin of California.Â  He assured me of his roots in the SF Bay Area and that he wasÂ  from Pittsburgh.Â  For some reason this little bit of geography had me baffled.

Sonofabitch clocks me right in the mug.Â  Totally unannounced.Â  No haduken, no nothing.Â  Now despite having a nose seemingly modeled after a ski slope, I assure you it’s pretty much glass.Â  Pinky could blast a thunder fart in the next room over and it would probably get my nose bleedin.Â  And this asshole punched meÂ  twice as hard as Pinky’s fart hits.Â  I don’t hit people in the face.Â  It’s jus not my thing.Â  Call it forbearance.Â  I totally had my booze shield paired with my retard strength anyway so thats like +10 strength + 9 defence.Â  My initial responce kinda went like this :

My 2nd responce was:

I like to think that I drew inspiration for this act from our commander in chief and I was, like Obama, engaging in direct diplomacy with leaders / douschebags from god fucking awful parts of the world.

My first contact / peace offering with this misguided manbrute was an outstretched hand and a “hey man whats youre name?” compressed into an indiscriminate single syllable noise.Â  Again, I must have offended this guy with my incoherent mumbling cause he started throwin hammers again.Â  I was then forced to immediately prepare myself for battle, whilst he immediately prepared himself for butthole.

I can’t properly get into the details of the scuffle cause I feel like I was hardly there for it but I will liken it to a cartoon fight wherein the fighters are entangled in a vortex-like cloud riddled with jagged lines and exclamation points.Â  I can thank Pinky and this Frankenstein looking motherfucker for coming to help clean up my mess.

Two arrests, one cold cab ride, and eleven hours of sleep later I woke up lookin like Don Corleone on one side of my face.Â  The hurt was all over, I was thankful to Joe for chewing up banana and giving it to me to re-eat.Â  Good guy.Â  Mantastic.

Thanks Barry for driving us and doing the dishes.Â  Thank you Cahill for giving me a joy filled ride and taking me out in the Miata.Â  Thanks Joe for being my nighttime lap dog.Â  Ian, for being one passionate and angsty manbear.Â  Thank you Pinky for having a strong right-hand.Â  And thank you Pittsburgh, CA for being the putrid armpit of the East Bay, breeding ground for classless pieces of shit, limpdick tall-tee wearing shit smears.

Being the epitome of fucking fashion that I am, I decided to drastically up my level of chic to celebrate the eve of the new year in powerful style, and pushed the idea to the bro calvary to “follow suit”. Â (eh?) Â

And so, decked in our jacket/slacks combo we assembled at Mike’s spot for a meat eating good time or in Ally’s case, tasty veggie borger! Â I did well to gain acquaintanceship with Sir Slug, the resident pug of the Klink pad. Â I invite you to share the lol that I feel from looking at this wondrous image – here, we see the slug pug locked in epic gaze with Laura in what can only be described as rofflefull. Â

The night wore on and the grains of 2008’s sand slipped away, we all did well to drain bottles of Fat Tire and I made more sausages disappear than a homosexual who has homosexual intercourse.Â Â (noonprop8).Â Â

A few more Fat Tires later I was getting awfully friendly with hoesafe, much like he was having a good go at my knee some months prior. Â

After we were all sufficiently loaded up on animal bits and the average twenty-year olds Â idea of premium booze we responsibly piled into the respective cars of sober drivers. Â Reassembling at Courtney’s pad and evidently, ROLLIN’ FUCKIN DEEP SON. Â

By this time, (11:00pm maybe?) Â I was a bit passed standard sauciness and quickly approaching high school drunk. Â If you’re wondering what this can look like on my face, allow me to present you with the following photo evidence : Exhibit A, Exhibit B, & Exhibit C.Â

As many can atest to I am not a violent dude, nor am I typically overly confrontational and even when I’ve been hittin the medicine hard I like to think I do alright to not be “that guy.” Â What I’m getting at is I pick people up. Â Always. Â All the time. Â Always. Kelsey, who looks to be drinking what can only be green bean juice, I picked her up. Â Jenny, picked her up twice, possibly relocating a hair or two of hers onto Courtney’s kitchen ceiling. Â As for my lovely ass girlfriend…well, this aint that kinda website. Â This, I had nothing to fucking do with. Â

Cute-as-a-button girls are not the only potential prey, hoesafe got some manlove from yours truly too. Â He didn’t like that. Â Not. Â One. Bit. Â And the rest of the night he hid. Â

Happy New Year – here’s the rest of the pics.