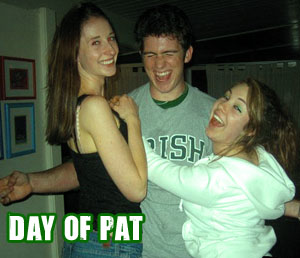 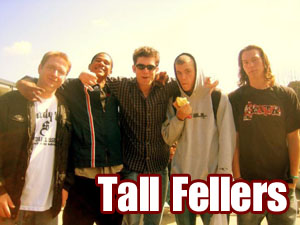 The NBHQ-cam made it’s way to the Aragon High School campus the other day, captured the incredible flying douschebag, not to mention an overly sedate Kyle thanks to his new whiteout habit which all the kids call “DubWhite.” Heartbreaking. This pic right here is what I think back to my bros in high school when I’m eighty and livin like Hef and what not.

Word on the streets is that my boy K-Dubb is gonna design the new NBHQ shirts, yeah I’ve seen what they’re gonna like, and yeh your torso is gonna beg to be covered with em. Please belee dat. Soon as K-Dubb shits the first batch out Imma start sellin em for like 6-7 bucks a pop whenever whoever. Except for Malchow. He can’t have one.

If your sick of NBHQ right now, your not alone cause it’s growin old on me and needs a face lift, with bigger boobs, and butt implants, and some big dumb fake lips for show. Expect a COMPLETELY new NBHQ.net comin real real damn sonofabitch soon. One with faster loading and shit that makes you pee in puddles. Also, the gallery is a tad fucked up at the moment, I’ll fix it, jus deal for the moment.

P.S. – Malchow WILL get a shirt I was jus kiddin 😛 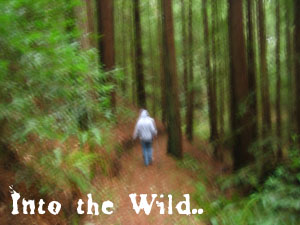 The bro Eebs lumbered over to my pad and scooped me into his grand jeep vehicle with hungry with an apetite for the outdoors. We 4-wheeled skyline till we spotted a trail that seemed to present an ample challenge and proceeded to conquer it for the next 2 hours or so. Advice: Do not attempt to wear sandles while attempting to hike. Over the course of our adventure Matty and I came across the guy that does the Geico commercials, den I picked em up and Matty rubbed his belly, felt kinda like a wet fat kid might. So like I said, around two hours; against the elements, and at their mercy all the way my cold and exposed toes would have surely detached and regroup in my throat in a strangle attempt had they the chance. But you know me, I keep my appendages in check. Anyway, manly pictures were takin, us with our walking sticks (not visible due to shrinkage affect). My final words on that matter with Matty: twas a good time that beckons a sequel that will be posted and photographed. G’times Matty Boy. 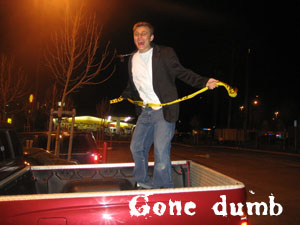 I spend my weekends with dudes. That’s my story lately, I think I might play that gay card except when it comes down to the cooking and my skills or lack thereof , that and the boobs and da heiny. I also enjoy singing.

Heres a picture of Josef after his cocaine snort, it might have been powdered sugar though, we’re looking into it, either way his puny balls could not handle the sensation. Ian spilled V-juice on the chair cushion, and you can probably guess what happend next…Joe lapped it up like a kitty and her lil milk saucer, cept less cute and more alcoholicy. Joe makes funny faces after he sips on his potent oil as apparent here and meow. I tend to look more like this.

We are the responcible lads and take to the streets as opposed to vehicular transportation, nor do we operate heavy machinery, cept for our penises, which are unbelieveably large and heavy. Joe got stuck under an overpass kinda like a retarded mosquito catcher who finds his way into your bathroom while your taking a shower and than melts on your ceiling.

Joe pissed outside McDonalds, and I laughed accordingly. Then a mysterious woman in a truck came and stuck it in the arse of Joe causing a little bit of hurl to climb up my esophagus, no biggy. The night ended back at my pad with some old times NES Action and some