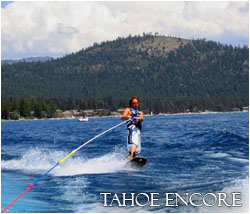 Spent the last couple days in Tahoe again with my lovely girlfriend eatin filet mignon and ridin wave runners, no biggy. We met up with Ash’ms and the rest of her family, and their big nice boat, with two big nice tubes. Tubing was damn fun. Than we upped the antee a bit and busted out the wakeboard. At which point, Ash, Julia, and Danny Boy made me appear in the lamest of ways. I’m not gonna even try to lie, me and gravity arent the best of friends and “graceful” is not a word I would use to describe myself as, espcially when it comes to getting my sasquatch-ass feet inside the footholes made for ordinary humans. When we were through, we stumbled upon a crawdad or two, they’re big, and scared the crawpoop outta julia. Anyway, more steak and cake was eatin and Danny and I failed at giving Julia a dirty sanchez. 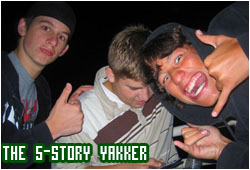 Sidekicks are rediculously stupid, however, obscene 3-fingered gestures are not. Pinky should start of his clothing line, one that sells shants exclusively. The crew, more than 20 men strong, ( 40 balls in all ) gathered at the 5 story after most partook in acts not looked fondly upon by college boards and federal authorities, our good friend Umpy was feeling a little “under the weather” and sought sweet relief as he violently hurled mouthful after moutful of the substances that had nauseated the lad. I honestly cannot explain the vileness of the situation, watching the “upchuck” trickle down the side of the 5 story parking garage, floor after floor like a little barf slinky, each chunk glistening in the late night moon light…Nasty 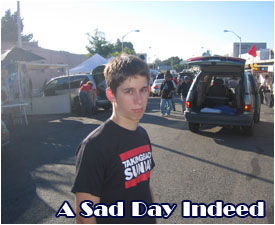 Holy Cannoli we missed the Italian Festival this year! A major blowit indeed, prolly serves me right for thinkin I could walk there in time with good ol Ian. POR QUEEEEEE?! And aint that a kick in the head, seein all those lil one-time-a-year stands closin shop, the orange julius knockoff stand, the pina kowlada in a pineapple stand, and runnin into bro Jared. For shame. The day was salvaged after a visit to La Cumbre ( best burritos in the world ). The night began with a downtown stroll, and yes it is very cool havin a buddy in the motion picture biz, all flicks should be free.99. We had a run-in with the now chain-smoking Aaron at a different taqueria ( that has the best horchatas ). Joe got off work soon after and they were lickin the cold stone walls and drooling at its female employees. Anyway, the horchata was tossed and I got to come home to this, no complaints.

School starts soon, my birthday is the 25th, I’ll whip up another layout or somethin. I’m selling my computer. My room looks amazing thanks to E & A. The next post will be better. 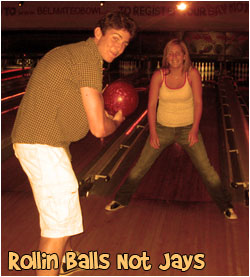 Monday equals Disco Bowlin @ Bel Mateo, which means the ladies get wild and ten whole frames of outrageous entertainment! I enjoyed the shoes, but did not enjoy how my fingers smelled after I withdrew them from the three ball holes, that was pretty gross actually. It was decided that we would bust out the bumpers cause my game, though usually impeccable, has gotten a tad rusty, and even than, I had trouble unleashing my athletic fury cause Emily kept throwin off my motion! Whatever, I bowled a strike through Ash’s legs anyway. I liked these balls cause they looked like big cool watermelons, and besides, being the only male present meant that I had to constantly remind my female company of my masculinity so I had to be sure to get the heaviest balls knaw mean? Ash and Em still thought I was a dousche though. To my surprise and delight, my woman could roll a bowl like no mans buidness, hot. Took time for posin too, and plenty of it. Megs hella good, Ash had a little swagger to her windup, and Taylor knocked down a buncha pins everytime but I don’t think she even meant to. Great clapper though.

Other than that fun-filled night of knockin down pins, I really haven’t really been up to much. Saw some flicks, Dark Water which is basically about a mother and daughter who suffer from a extreme and irrational fear of their own apartment’s lowly plumbing system, I wouldn’t recommend it. Saw War of the Worlds, reminded me of those “Zords” that the power rangers would fight putties in, most of the praise surrounding the movie revolved around the groundbreaking special effects and what not, but a “special” effect really isn’t “special” if it is apparent in virtually every frame of the motion picture. So theres my 2 cents.

I went to the gym today and benchpressed 260 pounds, I also pulled a gigantic tick from the armpit of my dear poodle, Tina. I got another haircut, and so did these two ladies. I got 83 pictures developed at longs for 20 cents a piece.

I upgraded the photo gallery to the current version, and tweaked the comment system a bit, so be sure to COMMENT ON THE PICTURES MORE. That is all, do it now. 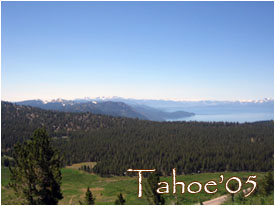 It’s been a buncha hot days since I’ve my back fat has stuck to the sticky black leather of my executive night sky black office chair and poked away at my keyboard. Ten of these blazing days I spent learning how to water-ski, admiring geese, and pickin up hotties in the beautiful Lake Tahoe. This is my second time out there, first time was with eebs. This time definately had its perks, gettin to wake up to my girl on the norm, lettin the sun scar my corneas out of dreamland, I am my own biological timepiece, the corona, my alarm clock. Speakin of that lil relentless yellow blistering ball of heat, I, being of honkey decent, living in a body plagued by freckles, moles, and various other types of dermatological wonders, I am what you would call “prone to sun damage.” Being, 6,500 feet closer to the sun than in good ol San Mateo, might also be a contributing factor to why my skin pigment illuminates to a glowing shade of red, we can expect a full peel any day now. So a lotta days were spent out on the lake on my noble aquatic steed, the baddest of the bad wave runner galloping to speeds over 50 mph guaranteed to disturb the tranquility of my fine feathered friends… 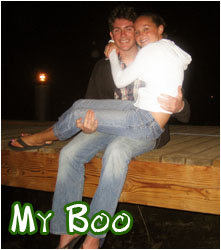 I tried tubing a couple times, and promptly came to the conclusion that it was not intended for the male gender or any other halfway-gender with protrusive components, lotta slapping of the goods goin on… Julia did it like a G and made me ashamed of my testicles and assorted manhood. That girl is a crazy ass driver on that jet ski too, hurled my ass off it the first time we went on it, betcha wish I took a pic of that shit eh? Too damn bad Jack. This is a 14 ft long anaconda snake skin, I will answer no questions on the matter. This is McKenna burying my foot alive, and here’s a rare sighting of a bunny in twilight. Spent some days with volleyball superstar Katie Hurley, she’s a pussy. She’s 5’10, we shot the shit about living as giants among the dwarfs, she really wanted to make sure I put this picture online and I respect the wishes of my freakishly tall sister. She tried tubing and held on the whole time, and managed to stay afloat. Kudos. 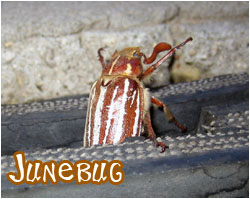 I ask you now, my undying legion of dedicated fans and followers : have any of you heard of a “Junebug”? Insectile, ball of hiss, teeth, talons, with wings about the size of Cahill, bigass fucker. One of those bugs that you can hear before you see god damn helicopter. Anyway, I spent this year’s 4th of July over there, peeped some superior works of fire, along with this fine flame thanks to Drew and his irresistable lumberjack skills we ate the obligatory yearly meal of hotty dogs, ribs, chicks, corn, steaks, the best eats I’ve had in a damn while. Big ups to chefs for that. So as the eve wore on, and the rockets’ red glare, the bombs bursting in air subsided, we treated into my 10-day home and watched in amazement as my ladies momma bust out her samurai sword and warn that she’d cut a bitch if the need beckoned.

A buncha days were spent on the boat, I liked the boat, took neat pictures on the boat, and Katie sucks ass at trying to get on the boat. We went on a hike, saw a fat black spider on the hike, I also saw and tasted snow, and ya better believe I dint hesitate to slide down that ish along with Julia’s cousin Lucas who bears a STRIKE resemblence to the kid from that christmas movie. All and all it really was the best damn vacation I’ve had in a long while, pickin up hotties, so havin a hot girlfriend is pretty much the best times, even if I hafta help her groom herself

Click here to see all the pics from tahoe (79 pics ) 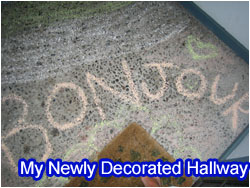 So since I’ve been back home, sweating my balls off, I have been the victim, yet again, of a malicious assault on my hallway. The culprits at large chalked the entire entryway, everywhere, and than had the nerve to leave their French calling card. Damn hooligans.

Had a few people over the other night, Pinky and me thunk up the idea to stuff a buncha modified Piccolo Petes ( fireworks ) inside this here computer, but than got sidetracked and ended up in the pool with Emily, and the lord of the rings, Ash’ms. At first I had those beezies right where I wanted em…The tables quickly turned, and I was swiftly kicked in the wall, she didn’t waste any time latchin onto my hand with her sharpass grill, check out my Emily bite, brutal eh? What Emily DIDN’T know was that I am quite skilled in the art of croc handling and went straight for her powerful mandible was wearin her like a glove. 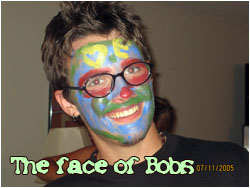 Than Bobs, Brandan, and Caitlin swung by. Ash put her painting on pause to braid Bran’s long ass hair, while Emily painted Bobs’ face. Than they both did me, reminded me of my time spent in juvy…Anyway, we looked awesome, and Brandon looked pretty bitchin himself with his newfound braids. So a couple hours later, when the fellas went to leave, the car wouldnt start, tried to jumpstart the thing with no avail, as if Brandon knew what the ass he was doin anyway. The Bobs sprung Colin a ring and within minutes, he had em runnin T-H-E fuckin END.

From now on I wont take so long to post, All Apologies. Check out the views gallery if your into breathtaking scenery and eye-opening sunsets.