Havent said much inna few days eh? Now I know you fiends pump this shit in intravenously so I guess i’ll share the petty details of a typical “HAPPENIN” Friday at Aragon High School. Well first period I have science, or physics…or something like that where we do labs and stuff, not much to do so we got Ana to lick a battery that was pretty funny, notice how hard shes gripping the pencil, hah! Than good time party boys third period when we pretend like we know what the hell the variable capacitance of the integrated circuit on the solderless breadboard is…While some get frustrated, others throw up the shock and salute. Some find a good book and fancy showin pictures to the illiterate. All the while Leonard ( my boy from Fiji ) is sittin there chillin, and bigass Evan who’s roughly six foot fifteen points those massive middle fingers to the ceiling that isn’t far away. But the photo that takes the cake, the donut, and probably more than I can list, is this bad boy right here, click it. Oh and heres of a very cute couple.

Lunch was cool cause Kai was eatin his lil dumplings and we glared at the shitdipper freshman who showed blatent disreguard for caution tape and lock up there shit inna flippin danger zone! these guys enjoyed it.

We had an assembly with Reveran Kyles, the guy who was with Martin Luther King Jr. when he was shot down and killed, hes in the famous shot of the guys pointing towards the fleeing assailent. He gave a killer speech, I watched it twice, makes me wish I was a brotha.. I took his picture with Danielle, San Juan, and even one of me and him. Cool guy…Leo dug it

So how bout the game eh? I gotta say that the bowl was a little bit of a bummer, no booby flops, no Ashlee Simpson shitups, and Ruff won 300 bucks… I don’t know though, I think my uncle did ok. The commercials were cool, I liked the funny ones..Well thats all I gotta say…shut up…comment

Got a lot off my chest today, 235 pounds to be exact, lifted for two hours today, gettin more Tongan by the day. I wanna be able to hit 250 a few times by the end of the year, I hope to someday change my last name to Bradyolanitani and get one of those bitchin tribal tats on my forearm. That’d be soo flippin sweet.

Anyway, lunch with the fellas today, the times, they were powerful good, the food was cheap and greasy, (jus like your mom). Russel smoked the shit outta Scott’s mustang, and he doesn’t even know how to shift, and Cahill came in second. Four burnouts and 3 pot stickers later I was back home, strappin on my shoes for the days run.

Last finals tommorow, iono bout you guys but I got Maff and History and I’m a tid bit nervous about failing miserably and living the rest of my life without the slighest idea of what the hell a ‘octohedron’ looks like! History shaint be as bad, but chocolate of boxes you get what you always know. Dyslexia is funny.

Well if this post hasn’t livin up to its title than its about to, heres some shots of me when I was about three years of age: 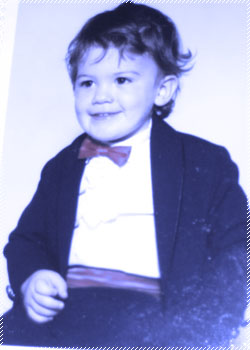 Rockin the plaid shirt (grunge status) – Very cool Jacket – Up close and personalComment if you know whats good for you, (1% milk)

Got that badass camera I was tellin yas aboot, it’s pretty flippin sweet. Why heck, even the box is purrdy. When I first laid eyes upon it I was all like YESSS, this guy thought it was cool, this chic kinda dug it, and my boy was all for it. I was pleased at all the commotion, so I took some shots of my guarddog and one more.

Oh and I also ordered one of those bitchin shirts. I threw it on right quick jus to model it, and I think everyone should buy one. If your local, call me up or talk to me at school, if I can find 15 or more peeps that want one I can sell em for even cheaper, ( I got 10 so far ). Buy up fuckas!

So the other day me and Ruff went to go see Meet the Fockers the other night in Redwood City (not a bad city), now he parked a good 4 minutes away from the front of the theatre cause heez got sucha fine Caprise he dint want anyone fuckin with his goods. Anyway, we get out of the movie, headin towards the car and we find that someone has penetraded his ride’s seemingly impeccable security system. Now whoever did it had to have been dumb as wood cause they busted his entire window only to jack his 30 dollar deck and a stack of burned CDs. They left his bass controller and neglected the two 12 inch subwoofers in his trunk. Well 4 days later, hes got a new window with matching tint and a brand spankin new deck, not too shabby Ruff, not too shabby at all.

Oh and check this out Wong put together today:

Anyway, that’s all for now ladies and gents, expect another juicy post tommorow.