Who Is Mike Jones?

Pretty fat rager party at my crib this last weekend, my humble abode, packed, like a fat man in a very small jacket, blubber bursting out of the zipper. chics in tight jeans, a guy who eatscool beans, and two more pairs of jeans. Liquid was scarce at this particular function, Joe managed to find a dilute drink to satisfy his mangina. I looked on. Jazz flute and Smirnoff Twist are for little…fairy…boys. Quoted. Ruff managed to smuggle in some shit from China, some shit from China that came from a exceptionally large can. Perhaps you noticed this photo, that was the gruesome aftermath of this event ( 4.1 mb ) . So remember kids, don’t try to smash a huge can on your dome unless you want a big stupid facial laceration. Always wear protection. Be careful when using that rubber rope thing that is capable of whipping the eyeball out of your eyeball socket. Don’t touch momma’s reaching stick. When all else fails, jus chill with your home dog. 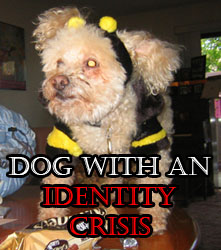 Speakin of that crazy rottweiler / German shepard of mine…We dressed her up. As a bumble bee, as batman, and the devil too. Now how many of you can you spent a Thursday evening dressing up your peach miniature poodle in not jus one but three cute lil outfits? Go on…raise your hands.

So aside from keeping you up to date with my affairs as a high school senior, I decided to bring back all the old photos from my Freshman and Sophomore year and compile them into one conveniant folder. This one, this folder right here baby, the new home to more than a lot of photos that spell out the life in the times, the struggles, the good times, the lack of short term memory, and the good times. Take this old one of Randy for examplehe had three slices of pizza in his grill, at that time. That’s pretty marvelous. Member that day we rocked the stashes before we could grow our own? Member the hoes? Member when I chugged all that robotussin and my head got all weird? How bout when my upstairs neighbor left his water on and flooded my house so the fire deptartment came to bust open his door. Dramatic. Jus check em out.

And don’t think I forgot to mention the CURRENT school pics, these bad boys right here. The one of hoisting up a random freshman ( obviously I dint learn shit from Natalie ) and obviously that freshman wasn’t random if she was Ash’ms lil sissy poo. Poptart kicks the hump of a thousand camels when he directs traffic in the morning, for that I applaud him. I dislike rolly backpacks for the simple fact that they obstruct my path which requires the utmost space to accomodate my lengthy strides. I DO like the guy on the left, I mean hes got it down, I wanna take him to lunch. I despice being in the company of people taller than I, so when I get the apportunity to stand beside my good friend Shell Fish, I don’t pass it up.

So thats all for now, I have a job interview tommorow for some little computer networking company in Redwood City, if you were that one armless girl I would ask you cross your fingers but…ya know. As you probably noticed I tweaked the CSS of the photo gallery and cleaned up the video section a bit. Thats jus the beginning. Bitches.