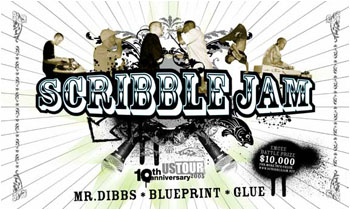 We’ll Pinky’s pink ass is off in the Catorina Islands off the coast of San Diego, dickin around with his Pink amigos probably getting pinker by the minute. Lucky for me, Pinky has a nice girlfriend with a nice friend with an even nicer Escalade. I had wanted to check out the Scribble Jam cause I had heard all those names before, and plus I’d never been to a rap show before. It was the same venue as the Finch show with half the people, which increased the odds of me makin it home with all ten toenails. It was weird only seein two dudes there, one with a mic and his bitch behind the tables, kinda takes away the overall stage presence, maybe that’s jus my take on it :P. Maybe deep down I kinda thought, kinda hoped Slug would pop out and tear Blueprint a new one for weak verses to spill out of. The first act, GLUE was real good, god damn that man could speak very fast, it was like watchin a fuckin auction with a beat to it, but it was good nonetheless, I’ll put some of his stuff up on the radio. The headliner, Mr. Dibbs was pretty crazy too, he seemed to have a lotta confidance about his wrist flickin / finger twitchin / vinyl scrapin skills as he stammered onstage. He managed to mix AC/DC with Jay-Z, ZZ-Top with Star Wars audio, pretty cool man. So I got to shake hands with all 3 acts cause they would all come down on the floor after their set, pretty downed to earth for underground / unheard of hip-hop artists, I left with a signed GLUE CD. Rap isn’t crap, but I still would have liked to see Atmosphere :/.

I had the fellas and the Turtle Squad over a few nights ago. Before the fellas made their grande arrival, the lassies and myself enjoyed a comedic motion picture entitled “Super Troopers.” We thorougly savoured and enjoyed each and every amusing scene, and found it humurous when one of the officers dares his partner to say “Meow” ten times to a pulled over speeder. Hah hah h-yessss. Anywhoo, I’ve NEVER been to London, Ashley’s been to France, and oh my lord, here we see Emily’s underpants gives me a yeast infection jus lookin at it…YEESH..hah get it? Megs Emo, but we all knew that beforehand. It was almost one in the morning, the ladies has long since gone, and the fellas grew restless. Craftily I took us all outside, to the church, wielding my water polo ball…it was cool. Patrick assumed the role of the playground pimp, a cone fight erupted between Derek and the Ninja, Kairon, and yes Derek is still passing trace amounts of flourescent orange rubber in his stool movements thanks to the quick, and relentless hands of his fellow fella, Kairon. Patrick cleared the eight stair on his feet, and made a damn funny face when he landed. Keep in mind now it’s almost 2:00 and these sons-a-bitches still got energy to play some hoops, and immediately, the shirts came off, and patrick schooled the young beezies. It quickly turned into a blurry, and probably really trippy push fest in the hectic midst of which Kai received a bruised left nut and had to “sit-n-chill” for a sec. And after a long hard game with the boys, good ol JoJo came inside and cuddled up with his best girl. Cute shit.

So I guess you can say I’ve been busy lately, this is the first day in about 3-4 days that I even bothered turning my computer on. Gym-going and raisin bran CRUNCH-eating have pretty much dominated my daily routine as of late, and I still have the imminent task of getting a god damn job and a liscence/permit weighing down my shoulders which really is quite insignificant compared to the 145 pounds that I normally shoulder press MWA-HAH BITCHES, 1 ticket to hernia-ville por favor. I’ll drop the new layout when I damn will please so stop e-mailing me.

On a side note : On a rating of 1-10 how old would you say Michael Jackson’s boyfriend is? 😀 Did you hear he got acquitted? Apparently money buys more than jus noses…

– 460 bucks for star wars cereal boxes, anyone? anyone?
– I really don’t even know what to put for this
– Jack Johnson Surfing Game
– “Franimals”
– The TRUTH about MySpace