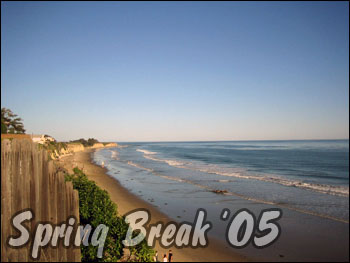 Oh how I missed you all so very much! Spring break set a new standard for what is “the shit” and what quite frankly…no longer is. Example? beer pong is the shit, bobbing for diet A&W inna tub full of ice…no longer is. But I’ll get back to that..Now how many of you can say that you and your buddy fuckin tripped it a buncha hours and even more miles to Cal Poly to stay wiff his brudda and his frat fellas? Cause…I can say that. Musta been about five or six hours my ass was lucky enough to plop down on Eebsies heated, reclinable, leather seats in his smooth sailin vehicle. Ten CD’s and two Double-Doubles later we arrived at the SAE house and were greeted with quite a view not to mention this chilled out herbivore that goes by Grant. Lotta shallow days and hollow night spent at this pad, video games were played, bombass steak was eaten, and Eebs and I both got to know Brooke the dog. Oh yeh, they had a goat in the backyard too. AND an outside couch that pictures were takin on, hell, Eebs got one in as well. That’s really all the photos my conscience will permit me to put up, we got reps to uphold knaw mean? Let the imagination soar on that one 😉

Onwards to Santa Barbara, home of the sexy ass beaches and very laid back bicycle riders (as oxymoronic as that sounds). There we stayed with Eeb’s sister, in her amazin abode that she was inhabited by her fellow sorority sisses. They didn’t have a goat or anything but they get to walk in their backyard every morning and look out onto this. Santa Barbara seems to be a hellova place, did I mention the beaches?

Now..me and Matty boy got down jus about every night but our biggest night had to be the Santa Barbara Houseparty…It went like this: two keggers chilled by Mr. Kegorater, mucho sausage, females looked like they were facing extinction cause I only saw a couple, and by a couple I mean one and two. I forgot to catch anyones name at that fiesta..but by the end of the night they had all heard of Brady and Eebs, the rugby playing Yale students visiting family in Santa Barbara. I made buddy buddies with terminator, these guys, jesus, these bias, shit man, even made frisky with Eebs himself. I duwanna list anymore peopole so I wont. Few hours into the wild and crazy rumpus we departed and made our many unfaltering steps down the street, past the bob marley house, stopped so Eebs could water a bush, and took a picture mid-sneeze. 4:30 rocked and rolled around, our bellies ready to foam back up any minute, so we fell asleep in the car. End of story. Morals? Park close.

Got home last night and took immediate advantage of my newfound bronzey glow and headed over to my ol pal Sasha’s, she’s the one who was rockin the soda filled ice tub, dint stay too long, in fact…I kinda jacked some of her guests and brought em back to my place for popcorn and lemonade. Room was pretty full but we made do. Natalie made an appearance too, with her busted ass cholar bone. Buncha the ladies threw together some flyass fan signs, Melissa made one, Natalie did one, and even this girl did one (whos name escapes me..)

Oh by the way did you happen to notice the April Fools MySpace page? Eh, eh? :D. Good junk eh? Jeez some of you fools take some shit hella seriously, I got about four assloads of e-mails from my most concerned of viewers and angered bias who swore to never come back to NBHQ and even some creepy emo fools who wanted to swap pics. Ixnay on the emo trash, thanks anyways. Love and peace sweethearts.