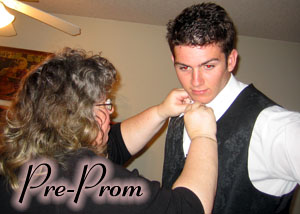 Ah yes Prom 2006, my first and last as a student of Aragon High School, a startling fact indeed. First and foremore I gotta thank Lauren (that’s the only picture I have of her) for helpin me pick out a tux to match my impeccable sense of style. Than I have to thank my mom for passing along her height genes, and pops for the bronzen tan. I rather enjoy how it took me less than an hour to scrub my grimey hairy ass in the shower, shave, apply generous amounts of deoderant and cologne and be out the door while it took my date 14.2 hours and she still forgot my corsage! Frickin broads eh? Dinner was served at my boy Adam’s house, I have found memories of that home of his. We enjoyed steak while I enjoyed thirds and fourths, and people ask me where I keep it all. When fully assembled we make a respectable mob.

And of course, as a respectable swarm of respectable individuals, we require an equally bitchin mode of transportation, when others went stupid, dumb, retarded in low riding second-rate limousines and yellow cabs, we went stretch, we went big with our stretch navigator luxurious to the max. We also had a robot like driver who we persuaded to answer to the name “Mario” because he fuckin should for 75 bucks a head. We tried to get him to shave my ass but he respectably turned us down. That was my first experience in a limousine and I must say, I was impressed. Mario sure knows how to treat a man. When we arrived in front of the Gifts Center in San Francisco, Mario came and opened our doors and winked at me and slapped my ass on the way out. Jay Kay. We were dressed to kill and ready to mingle. The crowd was indeed dense, and check out Juan there in the backround throwin up god knows what. Maybe he was pissed I was jockin his lovely cousin. Shhh.

So remember I told you fucks to vote for me for Prom King? Well, a lot of you did and you nominated the hell outta me, but a chill dude by the name of Jared Abbott beat me to it. Even though it was rigged and I demand a recount, it’s an honor losing to a man of his stature. Godspeed Jared. Maybe I’ll try again in four years when im a Senior in college and I can prey on some Freshman. That was for Ian. I hope he gets it.

In the midst of everything, the fantastic fab four made a reunion tour right in the middle of the dance floor and Ian endin up gettin his bra ripped and his dress torn, and his wrist bloody. I was responcible for the first two things. Dawkness Jr. went dumb cripple style. A slip-n-fall would register fairly high on my hilarity scale. LINDA BURNSSS! won Prom Queen, she reminds me of pochahontas in that pic. “Have you ever heard the wolf cry of the blue corn moon?” Disney trivia anyone? Anyone? Well..check out me and my queen.

The last song was played, the lights turned down low, and Mario was instructed “Yo homie drive slow”. Off to the Cathedral Inn we went, were we would drown our sobriety away, and prepare ourselves for a night of rambuncious merriment. OH SIX style. Bitches. Hella people had rooms so it was kinda like guess and check throughout each story, Lago & Alexandre denied access like a morally intact teenager. Luckily my guy was a little more loose on his entry policies and we came, we saw, and we mooched. He had a ass washer in his bathroom that under normal circumstances would have weighed much heavier on my mind. Thank god I didn’t have myself a seat.

These girls kissed, I enjoyed that very much. Very much. Than four girls touched their tongues in sweet wonderful dykish unity. I enjoyed that twice as much. I’m not 100% positive but I think Kyle is drooling in this pic and I think he fell on that beeramid shortly thereafter. But iono if that was before or after the “massage”. Charges have not yet been filed by the female receipiant. Meanwhile upstairs, Emily was in la-la land and looking quite funny in that pic I must say.

I decided to retire to Amanda’s room with the likes of Ian, Em, Ash, Christa and others. Sleep was not attained during this night and inspiration struck at quarter to 6 am when we those immune to the cold hands of sleep ascended up 4 flights of stairs to the heavenly plateu that was the roof of the Cathedral Inn. It was quite a view and quite a feeling, one I shall carry with me until I am old and my ass hair turns grey. That wasn’t my shirt that I was wearing, but I hope I didn’t nod off and forget a late night rendez vous with a illusive partner in the pisser with the ass washer in it. Hell of a view.

Breakfast was caught at about 1 pm the day following prom, the first meal in what seemed like years, I got me a meat lovers slam which sounds like a wrestling move for the Gay Wrestling Federation, and than ate Ians superbird and Ashley’s bacon when she wasn’t looking. Cause I’m meaty. I think Ian cried cause I stole his super bird. My bad dude.

Cheers to Prom. And in case I forgot to include any pics: