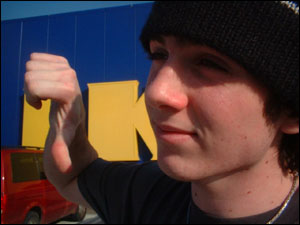 I want a new thing to hold all the shit in the corner of my room, a simple L-shaped book case / shelf thing would been nice, shoot I’d settle for a stack of bricks, anything but how it is now the leaning tower of swag. Anyway I’d never been to an IKEA, and I hadn’t known that the nearest one was in East Palo Alto which was coincidentally the murder capital of the U.S. in the mid nineties, thankfully I didn’t run into any scary dudes.. Anyway the place is easy enough to get into, it’s about fitty flippin stories tall and about tree football fields too wide. When you first stroll into the place it looks sorta like Costco after it was invaded by Switzerland, boastin products like the “HENSVIK
bookcase” and the “ENETRI shelving unit”, personally I was kinda taken with this farout CD tower named Benno. The showroom level, where you go check everything out in its natural habitat is all put together in this endless spiral that kinda leads you deeper and deeper into a place that looks exactly like the place you just got out of.. This kinda gimcrackery went on for an hour probably, passin Benny…or Benno, (whatever) every ten minutes. When I was set on leavin the place things got pretty Swiss pretty damn fast, trying to get to level one from level three by using an elevator that had about seven buttons on it, none saying one, and an escalator that only went up. I’d go down only to come right back up and be greeted by the same obtuse gent inna blue vest as if he had’nt seen me get out of the same elevator ten seconds ago.. I could bore you with the details about how I made my great escape but it’s really not that interesting, jus know that if you ever plan on goin to IKEA, plan on wasting time and comin out the emergency exit only to find a a big black crackhead who wants to ruin yer shit.

Monday and Tuesday no school, I been muy en fuego as of late, sportin a temp of 104 the other night, I yakked this mornin and coughed up a lung on my poodle, and I probably have the worst breath I’ve ever had in my life, I don’t know what to compare it to but I suggest that no one come near me until I can be thourougly disinsmellified.

I took some pics the other day at school, but not that many cause I forgot I had my camera with me :P. heres one of dallas takin like a mile away thanks to my badass camera and its infinity zoom. heres someones eye prolly Currans cause he always does that shit hah. Fej here shown hustlin bitches for juice at a bucka pop gotta respect a buisnessman. heres a close shot of dallas so close in fact that it might fool the eyes into thinkin that hes sportin some crimson red lipstick or somethin, Kai couldnt believe it!

Oh by the way I added a few more tracks to the radio. Imma add sommore content and shit to the site sooner than later so gett ready..