How NOT To Pick Up Girls… 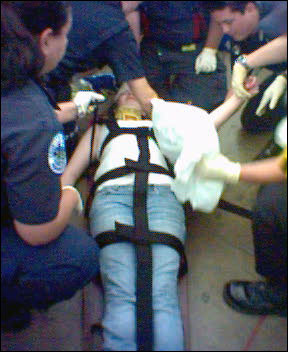 I’m sure you all remember Natalie right? The one who was sportin a sling for her busted clavicle not so many days ago? My driving instructor? Oh and did I mention her clavicle (choler bone)?! And I’m sure you are all aware my brutish tendency to hug and pick up anyone and anything I can…Well, on Friday I felt the need for Natalie to experience one of my “pick-ups” so I went to hoist Miss Natalie up with the quickness, over my head, arms fully extended, keep in mind that’s gotta be like 7 feet up ya know? With that very same quickness, gravity immediately took the upper hand, and Miss Natalie came back down, 7 feet down without puttin her arms out or anything, jus one…nasty…fall, onto cement. She wasn’t gettin up, piss damn near trickled down my pantaloons while I’m thinkin to myself “wow…what the F jus happend.”

I guess I forgot to mention Ally, Julia, and Emily were all there…witnesses to my heinous act; 911 dialers. We heard the sirens of the Ambulance and FIRE ENGINE before they had even gotten close, by that time I was trippin pretty hard, and poor Natalie is on the cold hardass ground hopin her damn shoulder doesn’t fall off or somethin. As you can see in the photo on the top left, there were a bunch of EMT peeps to strap Nat into her stretcher and into the ambulance off to the hospital. I talked to her when she got back home from the hospital and she said that since her choler bone had never fully healed in the first place, it jus got more…broken. :P. So I guess that was probably the craziest thing I’ve been an accomplace to all year.

I guess there is much to be learned, if I was Jerry Springer, and I had final thoughts they would be as follows:

1. Power lifting is something that is to be practiced within the confines of a designated weight room or gymnasium2. Gentle landings are essential in well executed “pick-ups”

3. What I did was NOT how you should pick up girls…

Onto to far more upbeat matters, both myself and my lesbianish haircut were in attendance at this years “All City” dance and not to sound “overly-hip” or anything but I found the event to be somewhat “off da hook.” I can’t thank these wonderful ladies enough “scrunching” my hair and givin me a ride to the dance in a sweet convertible BMW. And hey look! We even posed for my momma ( happy mothers day by the way ) The quality of picture taking seemed to go downhill after our pose de mi mama and things were starting to get sour. Soon enough, the same things sweetened up again after Meg and Ashley’s duette / triette with Kelly Clarkson ( 7.9 MB ), I highly suggest downloading that. It was the first time I had brought my camera to a dance but it wasn’t the first time I’d forgot to take pictures :P. I snapped a few with the boys and one with jus Lenny. And one of Julia lookin mighty fine. Bada Bing.

Yeh I know the party at Megs was more than a week ago, but I feel that you deserve to know how kickass it truly twas. I share the kickness with you now:
Arrived with Ash’ms and quickly met up with some of my main mengs, caught a glimpse of my sleeping twin and his ass woke up for me and we posed, and posed the night away. Girls, Girls, different girls, hugging girls, my girl, humping girls, super tall girl?. Heres an unnecessarily small beeramid composed of completely light brews that was soon knocked the FUCK over by my clumsy twin. Heres a crew shot with me and my AZN boys and another with my other buddies and one more two chinned delight one to grow on. Why heck! There were crew shots galore at Meg’s that night, I was lucky to partake in some while I was lucky to not expose myself in others( pooooorr Sheila hah ) When Doug showed up he was immediately engulfed in a sea of hugs but swam out of it and had time for a quick shot with the ol boy. Thats not me, thats not a beer bong it is merely apple cider being served in tubing apparatus…I’m serious. That’s me and my 2nd biggest fan ( 1rst is John Ferrel ) and here is a video of why this man is my 2nd biggest fan ( 7.5 MB ). ( Warning : Kind of annoying ) Heres the obligatory shot of John and Jill acting like they’ve been goin out for 5 months or something…:P And of course, no night is complete without me tryin to rub some tit on somebody and no night is completely kick ass unless Meg herself is involved 🙂

So I guess you guys noticed that the site was suspended for a week eh? :/ Well I guess you could say it was partly my fault for being naive and CHMOD’ing way too many folders with way too many permissions. Basically the site was suspended cause someone exploited one of the CGI scripts on the server and spammed / mailbombed the bajeebus outta people using my SMTP server so I had to deal with the reprocussions of some jerkoff kid. Anyway, Many thanks to Shivin Hameed, Rob G, and Ren from my host for helping me get the matter resolved. But that’s really all I have to say about that, remember kids, CGI scripts aren’t for everybody and can be very dangerous at times.

Congratulations to my bro Pinky for gettin off Probation, tell Stephan R to keep that shit wild style, and I’ll smile, and yo check the floor, gods got nice tiles ;).