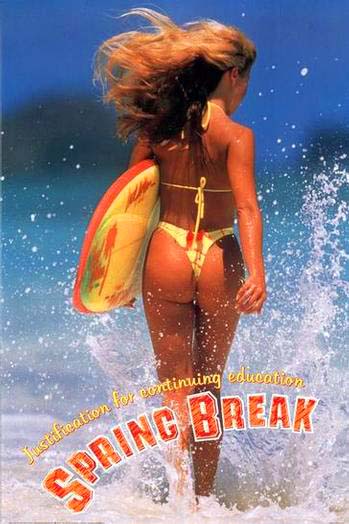 Oh gosh jeez where to start!? Well it started with two bad dudes and a fast car. We embarked on what was to become a 5 day road trip through the most scenic, exotic scenery known to modern man.

I, on the other hand found myself dealing with far more desirable odds forming my own cult of dumb promiscuous spring break bimbettes, and yes I was an excellent breast stroker in my day as is more than apparent. Heres a shot of me and m’ladies with Ricky Ray and Mutumboin the back, they were brothers, neat guys.

After three refreshing days in Daytona beach, the fellas and I had our fill of the local teenage offerings and headed south of the border to a lil town called CANCUN,MEXICO. Due to early departure and a vehicle capable of mach 2 on the open road we exited the continental United States at around noon which gave us plenty of time to scope out the local goods.

Joe found a cantina and some lolita freshman and disapeared before we could find a sweaty hotel to unpack, Ian tagged along with me holding the buckets which my perspiration filled, hes a pal for sure. Does anybody remember “Gangsta’s Paradise”? How bout that hardcore ultra tan thug who belted out the words? Well he was coolio back than but know lets people (like me and Ian) call him by his real name, Chester Langtson. We caught with Chester while MTV4 was filming a documentary and he was nice enough to let us snap a shot with him, click here.

And and if you will recall my seasoned breast stroking skills that landed me a gig hosting and judging the local bikini contest. It was fun times until the girl in the yellow suit was disqualified and removed from the competition after a scrotum could be visible out of her bottoms. Twas a shame because she had such a volumptuous Adam’s apple.

Day 6 of our wonderful spring break adventure and last day in Cancun I came across some members of my aforementioned cult, the Mexican chapter, I think my expression says it all. But as the sun quietly set, over the hills and far away into the Mexicana horizon, I couldn’t help but smile and recall the friends I had made the stories I was to share, the brain cells I was to destroy, and the memories that would last.

That was my Spring Break of 2006, Thank You. I lied about the whole thing.