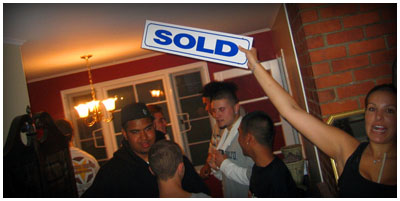 Well apparently this was a three-day extravangza thing that was goin on at Sam’s place, kind of like woodstock without all the mud and STDs (that I was unaware of until day three). If the two nights preceeding where any indicator on what I missed out on than I’ll slap my own ass cause there were fires, booze and tots. Plus Brad was there and was probably lookin for this all night. I don’t really know what the deal was with the “sold” sign, I think I can figure out how they got it though. Heres Christa’s bush. And heres me as a NORTE!!! or am I scrapper rapper. Who knows. That was pretty much the party…I think I stole someones bike that was laying in the bushes and rode it up the street, which was better than any warm beer.

Click HERE to see all the pics from the “SOLD” party

Asides from bike jacking and sign stealing I have done my best to cool out with the brothers, car loads of em. Tonight I attend a hopefully bitchin theme party that I shall be sure to snap shots of, I intend on defecating on the competition when I come dipped in my flyest caped crusader outfit. Tomorrow I embark on a 2-week vaca with this girl to Tahoe so don’t expect a post for a sec bitches. Heres some links to hold you over: