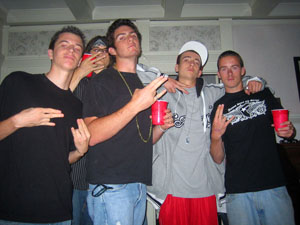 What’s better than pirates and a chilly keg eh? Yarrrr. Well this girl in the middle here hosted herself a full on amusement park-esque pirate theme party, complete with authentic pirate firearms, blades & plastic red cups. FTW. As usual, I rolled with the brosef Ian, but on top of that, big fuckin Randy the most thuggish, bossiest, hyphy train conductor of them all came through like a fuckin lightning shit storm from hell and sweat out hyphy juice from every pore on his manly body. And let me tell ya…he shook dem dreads alright, hard enough to look like “IT” from the Adams Family. The booty was up to pARRRRRRRRRRRR!!! Now, normally I rock out with my cock out for theme parties and come adorned in whatever the evening warrants, but on this eve, I felt that some mardi gras beads and a ass rag on my head would suffice. And it did.

This gal rocked my site on her arm, I wanted to bite it off and save it. Usually, I would say that the phrase “get a room” is overused, and a tad cliche, but in the instance of these two I’d say they need a room of a large accomodations.

Joe took a shot of god knows what, piss and vinegar maybe? Anyway, he cried like a bitch and died. The end.

During the latter part of the festivities I felt compelled to super lift miss Ryder into the night ago, not once but TWO TIMES!