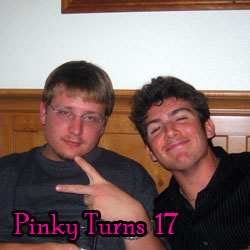 Pinky. My bueno amigo jus had his diece-siete over at the very luxorious comfor inn! And hey! At 81 dollars a night it better be right? Hella heads attended, our friend Jose C. showed up with his amigos Coron & Pacific. Twas a badass hotel room let me tell ya…hot red lights in the bathroom plus large amounts of marijuana equals girls too fucked up to get themselves out of the tub. I think I look a lot like a vampirein that pic and Pinky looks a tad crazy. As for this one it kinda appears as if my girl is a little nervous that the person holding her up might hit the deck any minute. in this pic I am reminded of big bird from sesame street, jus because. So anyway, it was a crackin night, I imitated Pinky, I noted the striking physical, and social similarities between these twins and oh yes they are fucking twins even though they “supposedly” say that they were born eleven months apart, thats horseshit. Joe-sef looked all washed up and ever so trashed. The same could be said for Caitlin who was showin off her own greenish complexion after her deep conversation with Jose C. As for me, I spent a lot of time on the bed with that hot girlfriend of mine. Hellova bed too, the bloodstained matress, the crispy sheets, and the bullet holes in the bed frame. Hell of a time, jus wait till your 18th Pinkster.

Click here to see all the pics from Pinky’s Teli 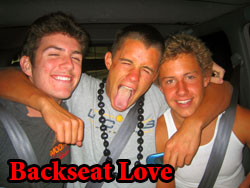 So other than attending supreme hotel parties I have been keepin busy with a plethora of michevious late night activities. Going to local shows with Joe-sef and the cigarette smoking Natalie. Or whether it be spotting Fahaad & the guy they call “Taco” while we are on the hunt for gang wars downtown. Maybe I enjoy takin photos of Joe sportin a face like he smells some piss. Than there was the time when we trashed Nat’s car. Most recently, we celebrated Poptart’s birfday at TGIF Fridays where he thorougly enjoyed the plush gift I gave him, him and his dirty ass crizzotch. From what I could tell, I think J-boy was havin a hellova time and aint that jus right.