Damn It Feels Good to be a Don 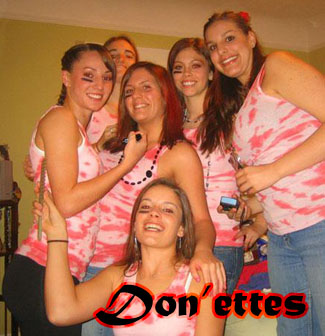 Ian and myself lost our voices screaming at the Aragon/Hillsdale quad in which our good ol Dons shat on the Knights in a 4-0 sweep. We brought the E+A along, but only after we waited for them to assemble, prepare, blowdry, and pose. So when we got their and found seats where we were packed like sardines, but it was tolerable cause we were in close proximinity with the coolest twins ever. It was a hellova game good enough to almost take up nailbiting, not quite though. E+A, try as they might they couldn’t keep my eyes from the court, see?.

Shit-on-Hillsdale and have a good time night continued with my first visit to Condon’s House. I dug. First of all, I came, I saw, I Pimped, jus to show the other dogs who humps the legs of bitches. I learned things that night,

1. Charles has a kidney of steel and a is pretty much immune to intoxication, and he could prolly kick my ass through a wall even if he ever was drunk.

2.Sasha is Vodka’s sissy bitch. She turns into Emily Rose after her shots. Compare.

3. This girl is fucking crazy. CRAZY

I forgot to mention anything of last weeks dinner with E+A+I that turned into a wet tee contest that I would have won if I was in it. I got picked up like a big fuckin fish. And I got cloned, twice.

I’m takin a day off school tommorow and goin to the beach. Expect more killer pics and a post made of pure balls.

P.S. I upgraded the Photo Gallery, it needs a lot of tweaking graphically, but it seems way faster to me, lemme know what you think.