Not a Bad Three Days Eh?

Well, I should probably start this post by apologizing to my very important fans, more specifically : Ash’ms, Em and Megan. Lets see now, so much happend since the last school bells wrang, since I scribbled in my last god damned bubble. Last couple days of my Junior Year, I brought my camera snapped ones with my boys and another one throwin up the pinky. Heres one of Mr. Dennis and I depicting our vast heigh differential. One last glimpse at this sexy mofo, one last hoorah with The Murph, one last chuckle as Pat shits himself trying to get 9 tonnes up on the bench, one last sight of Oliver lit off his ass, these pics speak forever though< (103 pics ). Congratulations Class of 2005, you will be missed, we’ll be sure to take care of your school for ya. 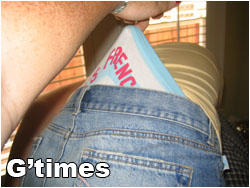 Bare with me now, the whole NBHQ Photo Gallery has been beefed up to contain more than ONE THOUSAND photos, more than 200 of which have been added within the last couple of days, so I got a lot to post about ;P. I’ll try to make things as chronologically accurate as my dwindling state of mind allows ( it is now 1:40 A.M. ). Second to last day of school was spent with 3 of my favorite ninja ladies, eatin at my favorite, La fuckin Cumbre, *(Voted All-Time Best Burritos in the World by Me)*, some girls spill on they selves, others get their loones hyked up past they’re titty balls. Either way, there was a whole lot of girl on girl on girl action which might have kinda grossed out Em or…made her turn japanese?. I no know. After burriton consumption, and a car ride, in a car that is very much “the sex”, we were back at Ashleys pad, where Emily bit off a large slab of my ass, it was nasty, Jill couldn’t even watch there was ass chunks and hair everywhere. And then! She had the nerve to yell at me, belleeeee dat? So..unnecessarily long story short, Ashley has a meth lab downstairs, along with a strong liking for Nina Campos and Asuka Cheeba.

Last Day of School, I really wouldn’t know much about cause I dint go. Now if you were to ask what I did instead of sincerely thanking each and every one of my teachers for a fun-filled, fantastic, fabulous, year I visited one hellova beach with, yeh you guessed it, those same, great 3 ladies. That ish was joyous if I do say so myself, they frolicked, they larked and so on. Oh did I mention carried all the equipment essential for boisterous activities? There was a dead bird, we buried the dead bird and gave him a pimpass memorial site. It was pretty hot at the beach, but the wah wah? Cold as my poodles nose, and equally damp. Cold enough to make Ashley shiver and Em shimmer it’s true, girls fear the h20 and have the cooties. Lot more lip action goin on too, and posin and posin more posin and holy cow, another pose struck. Wull sooner than later the boys made their rallying appearance, with Cahill’s pineapple ass behind the wheel. Got our balls out and kept that shit wild style, frisbees were thrown, foosballs caught, and bodies buried. Yep, that much is true, while these lads dug for the good of the Bee Bee Q, everyone else was busy burying me and shaping and reshaping my perky sweater muffins. Shortly after, harnessing herculean=like strength, I busted free of my sandy confines and skipped down into the wah-wah.

From there it was all cartwheels and NBHQ Appreciation time, not to mention pussified attempts at trying to catch a damn frisbee. Some of us brought the party in the little girls room, and that was cool. Meanwhile, Oompy guarded the wiener supply with the poker firmly gripped, oh did I mention Ooompy is a G. John-boy and Sheila came later, which is cool, cause I do enjoy piggy back rides and long meaningful walks on the beach so…that’s a hot combo. Male shot at the table, really cool backshot, and one more throwin up the pinky. Click here to see all the pics from the beach ( 69 pics ).

Same night, well keep in mind that I got a Pinky amount of Pink at the beach so my skin was a little…”tender.” Meg, Ash, Eebs and I went to a show in the city with Nurses, ReeveOliver, Vendetta Red, and Finch. The line damn near wrapped around the block, and inside it was almost as crowded as my teeth! No matter, Vendetta Red really really kicked ass, I think they were my favorite of the night. Reeve was pretty sick too, MAsh took a pic with the dreamy frontman and I got one with “O”. Finch hit the stage and we all got pretty damn close to em, cept for Matt, who was knee deep in mosh. I was tryin my hardest to keep the girls out of the kinetic mass of sweaty flesh that surrounded us, helps to be a big fuck in a crowd, I tell you what. We seriously were pretty damn close, close enough to count the spit bubbles on this guys tongue, I think that dude kinda looks like a lizard, or some other reptile, jus a thought. Anyway, Finch kicked mad ass I liked when the singer did the chicken dance that was neat. If your a fan of close up pictures and / or spit bubbles, Click here to see all the pics of the Finch / Vendetta Red / Nurses / ReeveOliver show ( 30 pics ). By the way, for the love of god, do not wear sandals to a finch concert. So I guess you can say…I left my toenail in Sannnnnn Frannnciscooooooooo

First day of summer the Marauder mobile rolled up on my block, picked me up like that one guy did to that one girl and then broke her choler bone :P. Thanks to Eebs for lettin me use his wicked axe and ampli-muh-fyer to play the music with the likes of Colin crawford, Joe Callhiou or however the ass you spell that ish, and the multitalented Ian Crawford oh and Courtney took great pictures, thanks Miss Walton. Joe ripped this roast beef sammich a new one. Click here to see all the pics from the Jam w/ the Marauders.

Well holy crap I think im almost done, aside from the scenic pics I took at the beach which you should probably look at. Not a bad 3 days eh? This summer is shapin up to kick a lot of well toned ass, and I plan to dip everything in creative juices and jus let that shit simmer for a bit. Oh and I do plan on gettin a new layout up before July (hopefully). Other than that, I’ll try update more pages, and keep listenin to the NBHQ Radio I add tracks to that thing all the time. Celebrate bitches.
J M M